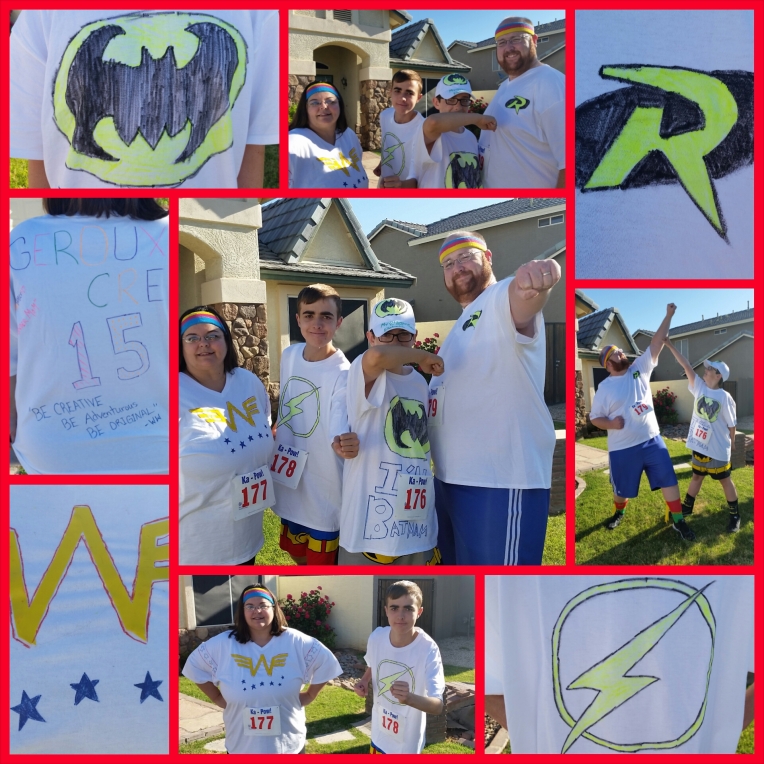 So the Geroux Crew geared up with homemade tees representing some iconic Super Heroes and headed out to Freestone Park in Gilbert for the Annual KaPow! Super Hero Fun Run.  This was our main  Fit Family Fun activity for the month of March.  We had some Wonder Woman, Batman, Robin and Flash representation.  Grandma and Grampa Geroux came along to cheer us on and capture some photos for us as well.

The event had vendors and music and games and over 20 obstacles. Our wave was to begin at 9:25 but we were watching and it seemed pretty laid back and informal so we decided to hop in with the 9:05am wave. 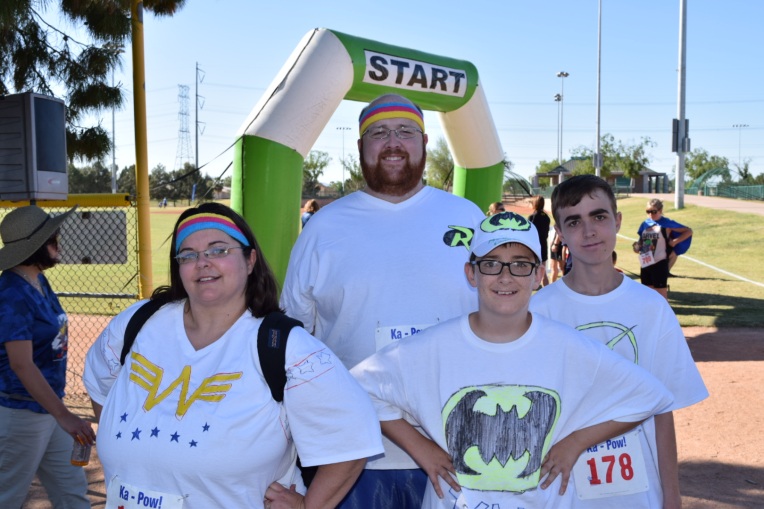 And this ladies and gentleman –on the very first obstacle of the course would be the last moment my right ACL was fully intact: 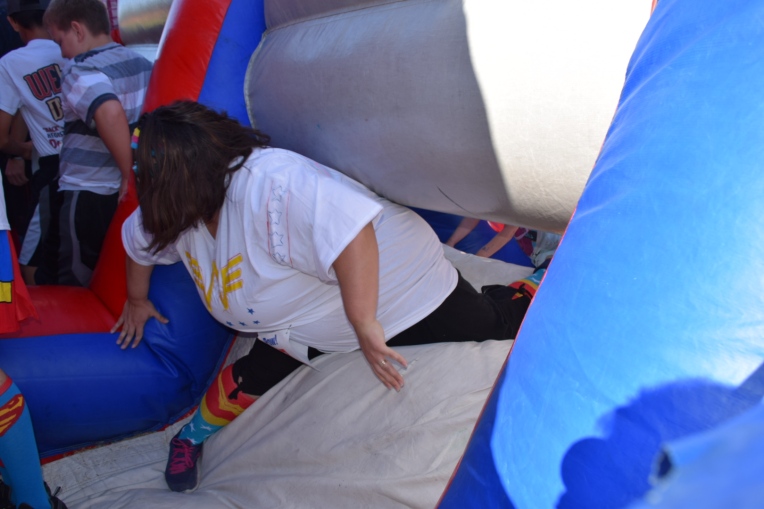 Yup- Daddio inadvertently captured my entire knee injury nearly frame for frame.  A soon as my weight fully shifted forward here the inflatable sunk straight down and my body rolled over the top of my knee. 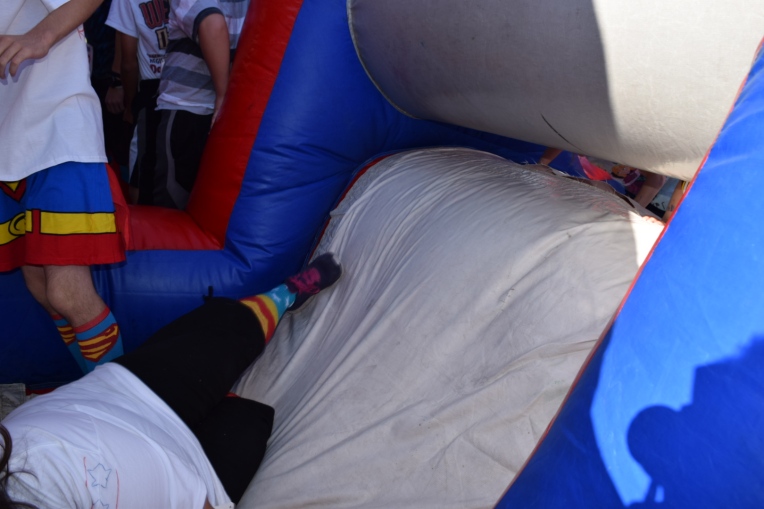 I have to laugh at it all now- especially since we have these pictures of it.  As soon as I heard the pop- I hollered out– “oh no I just BUSTED my knee”- Poor Ty started yelling “we need some help in here my mom just busted her knee!”  I some how stood up- and assessed my situation—I could either attempt to climb a 10 foot inflatable wall to a slide heading forward or squeeze myself back through where I just came- directly into the people trying to push their toddlers through behind me.  I opted for the latter- profusely apologizing.  Then I was faced with the back side of a 4 foot inflatable wall I had already climbed over– but the back side has no foot or hand holds on it– its just smooth—

Enter my He-man- Jason- who wisely opted out of attempting the obstacle- jumped up bent over the wall and yanked me over it—-I just went–and tumbled over it and my momentum paired with us being 2 big folk on plastic air just sunk. I am grateful I didnt hurt him.  By this point the boys come around the corner and are like “come on mom, we are running behind”—so I yelled– GO– Jason go with the boys…Go”

I knew – with it being the first obstacle there was no way that, even with rest, I would be doing this race.  So fueled by adrenalin I hobbled over to the shade and plopped myself down on the ground. Then the nausea hit- I so did not want to throw up- but that is my bodies “holy crap what did you just DO to me” response.  I was able to keep my stomach contents contained and eventually mom and I waved a golf cart over to take me over to watch the guys come through the finish line.

Dad got some shots of the guys on a few obstacles close by: 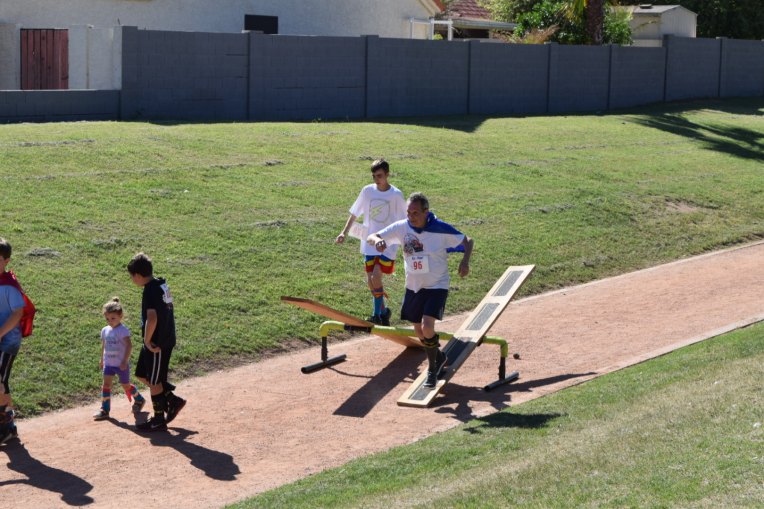 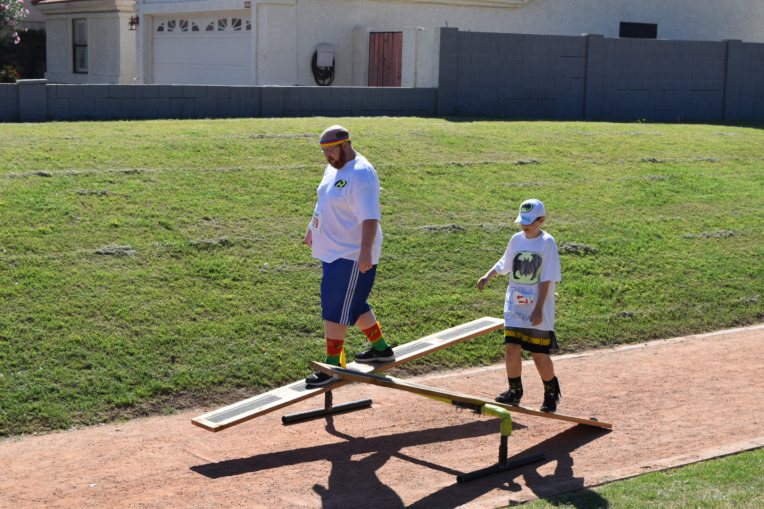 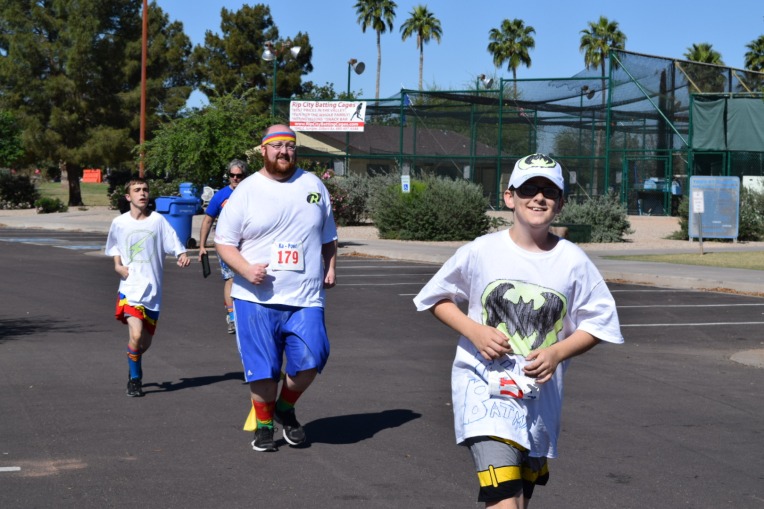 I went to Urgent Care and got x-rays-when I was manuevering around on the xray table felt another smaller pop and suddenly had range of motion back. So I had probably dislocated my knee cap and then popped it back in. Doc sent me to get an MRI— which was same day. I came home and iced and took some aleve and let the whole experience really sink in.  The next day I laid low and followed instructions to prop, ice and use crutches.  By Monday I was feeling good walking- even without crutches and even began going up and down the stairs a few times a day. So I really anticipated that I had only sprained it.

Several calls to the doc and Imaging center and my MRI was finally “read”  and I was diagnosed on Wednesday April 1st.

I have a complete tear of my anterior cruciate ligament and 2nd degree tear of my medial collateral ligament (3rd degree is complete)– I have an appointment Monday with an orthopedic doctor to figure out the next steps- surgery is likely on the horizon. Jason thought it was an April Fools Joke.

2 thoughts on “KaPow! In more ways than one!”

Stuff We Write About

Waking up with grateful hearts this morning...so much love and encouragement for this dude. Excited to see the next chapters unfold. #ThankYou #yearofCoo
Follow Geroux Crew on WordPress.com
%d bloggers like this: